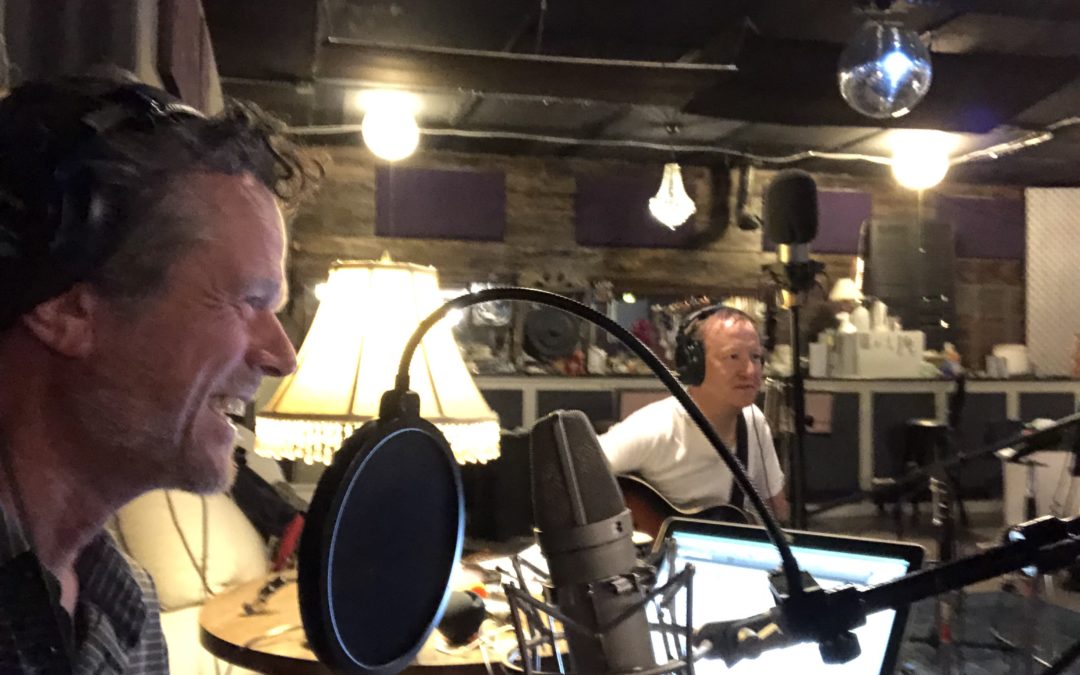 I caught up with Andre Bohren on a Monday in mid September for lunch at Liuzza’s by the Track. When I ask how he’s been, he exhales with a smile and says, “Busy.”
Busy would be an understatement. Andre is currently working on five records – hoping to get those projects to a point where he can put them on simmer, while he and his wife prepare to welcome their first child in October.
It’s a predictable list for those who know Andre Bohren: albums with his bands Johnny Sketch and the Dirty Notes, and Rory Danger and the Danger Dangers – as well as two classical albums (one solo, and one with violinist Harry Hardin).
But he’s also producing the second album for The Write Brothers – the super-songwriter group of Spencer Bohren, Jim McCormick, Alex McMurray and Paul Sanchez. It is the last project recorded by Andre’s father, Spencer Bohren, before he died of cancer in June.
“We only had my dad for the very first day in the studio – he played guitar on three songs and sang on two songs,” says Andre. “That’s all that we have in-studio from him.”The day was Friday, May 24th – a few weeks after Spencer Bohren’s moving, powerful final performances at Jazz Fest. The Write Brothers were back in the studio a few days later – May 28 and 29 – but Spencer was in the hospital. He was home for a few days before returning to the hospital on June 5th, where he passed away on June 8th.

Despite having only one day in the studio, Spencer’s work is very much part of the album.

“Of course they all wrote the songs together so he’s represented in that way,” says Andre. “And we took a couple of the kitchen table demos which they did at my folks’ house, took the vocals and dropped them into the recording. That way we got two more appearances from my dad that weren’t recorded in the studio, and so that’s really cool.”

The Write Brothers pen their songs together, and then they each sing one of the others’ tunes. But with Spencer’s passing, there’s one song that won’t be on the record – like an empty chair at the table.

“My dad was going to sing one of Jim’s songs,” Andre says. “He had picked it out and I had heard him mess with it a little bit, but it was in between hospital stays so he wasn’t full strength. You could kinda hear what he was going to do with it, it was gonna be beautiful, and it just didn’t happen.”

“Paul just crushes it,” said Andre. “It’s just me and Paul, I’m playing piano and Paul’s singing, and it’s – it’s powerful. My dad got to hear that in the studio, and it was powerful.”

To help fill in the harmonies that Spencer would have provided, The Write Brothers brought in “Write Sister,” Susan Cowsill. Also appearing on the album are bassist Dave Pomerleau, and a horn section made up of Scott Frock on trumpet, Craig Klein on trombone, and Joe Cabral on saxes. 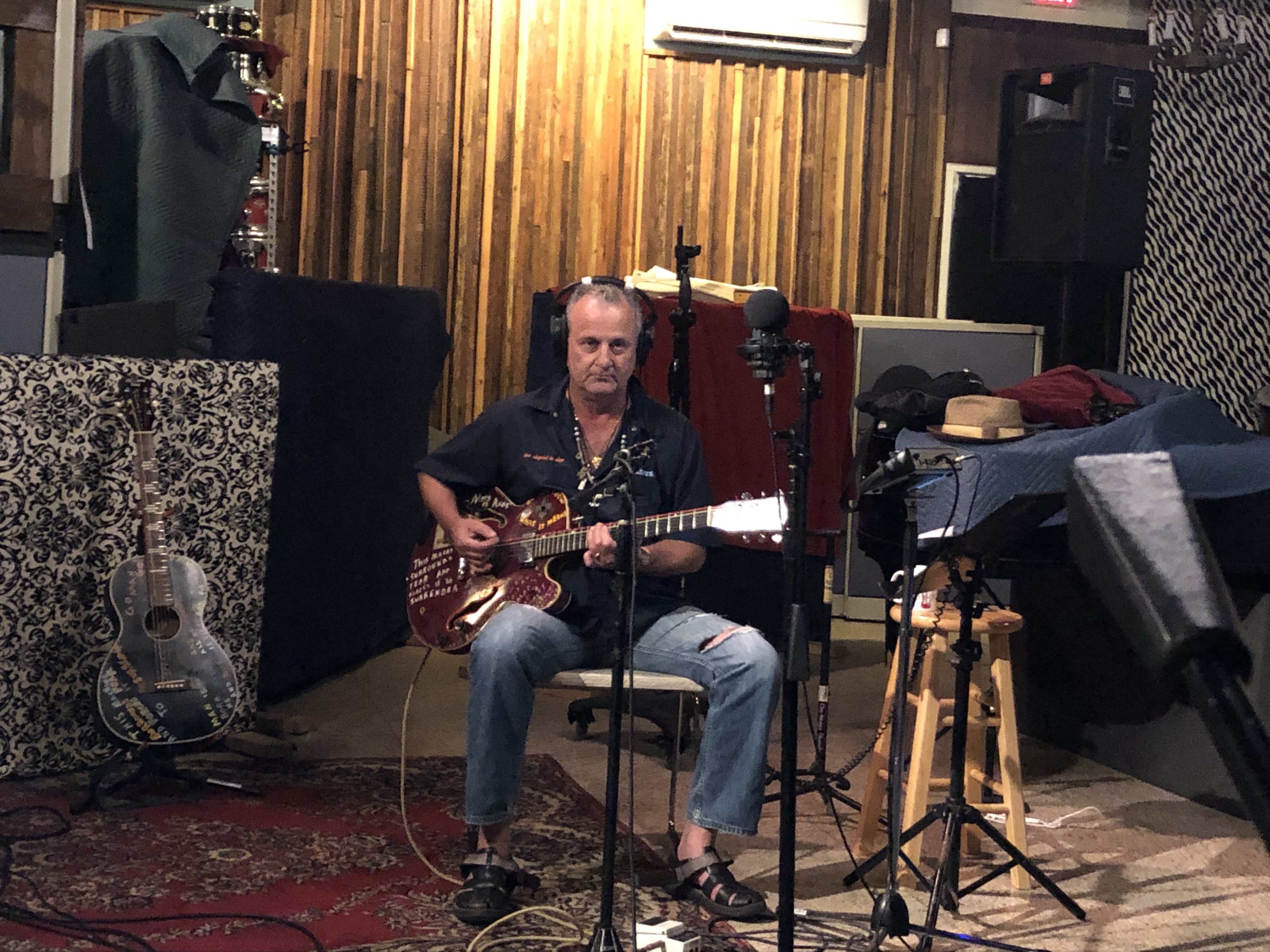 The studio work is done – which Andre says is a big milestone for any recording project, but comes with a false sense of completion. “Tracking you always feel like, ‘DONE!’ – but you’re only about halfway there,” he says.

The next step is finding someone to mix the album – the RIGHT someone.

“One of the things I really want to do is finish this right. I don’t want to rush it to get it out, because it’s the last thing my dad recorded and he was always very careful about the things he recorded,” says Andre. “I don’t want to tinker with it till it’s tinkered to death, but I do think it’s worth taking the time to tweak it and make sure that it’s all right there, and I think we’ve done that to this point.”

The album doesn’t have an official title yet, but Andre says a song written by Threadhead Chris Joseph, “Time Flies,” encompasses the overarching theme on the record.

“There’s a song Alex sings called, ‘It Gets Late So Early’ – I used to party all night long and now it’s like ‘oh, it gets late so early,’” Andre says. “And the one that Paul did of my dad’s is ‘There Goes Another Day’ – a song he wrote in the 90s about time. You wake up one day and you’re 40.”

The last song that Spencer Bohren recorded – with Alex McMurray – is called ‘Every Highway,’ a life retrospective, Andre says.

“My dad was worried about the strength of his voice, ‘cause his facilities were failing him. And he sounds like an old man on the song a little bit and – but the way the lyrics of the song and the story of the song, it’s the kind of thing where, if he sounded like 35 year old Spencer, I wouldn’t believe him,” Andre said. “This sounds like an old man telling people what’s up, and it’s powerful.”

Veteran recording engineer Mike Mayeux was brought on to mix the album, but there are other big decisions still to be made, like the artwork, and determining how to release the material; Andre anticipates the album will be completed by the end of the year.